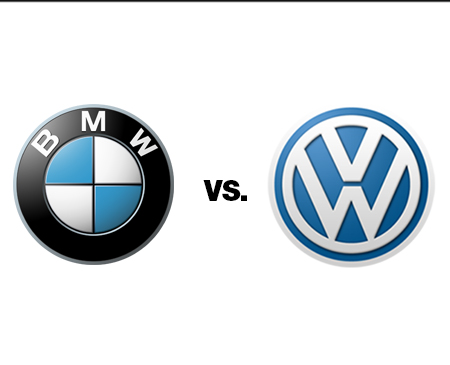 On the surface, both car brands carry similar attributes. They’re both German. BMW (Barvarian Motor Works) was founded in 1917 from the ashes of an aircraft engine factory while Volkswagen, The People’s Car, was founded shortly after with attachments to the Nazi trade union. Both brand marks use circles, the world’s most vaunted logo design shape and today, both stand among the world’s most recognized symbols.

Since getting my driver’s license at sixteen, I’ve owned eight cars. Six were VWs. My last VW Jetta keeps a BMW 3-series company in my garage.

I’ve been driving for roughly three decades. Not much as changed except maybe I’m more skilled at driving while not spilling any Taco Bell in my lap, a life skill worth honing. I’m courteous by allowing cars to merge, wait my turn at four way stops, and yield when required. Since having children, I’d say I even drive slower than I did during my rambunctious 20s or 30s. No surprise here. I’m mirroring national insurance stats for age vs. safety.

That all changed the day I first drove my BMW home. From the moment I hit a main artery, I found other drivers were not so polite in letting me merge-in during high traffic situations. I’ve been honked at more often for everything from not advancing off green lights soon enough to failure to give enough right away to pedestrians crossing streets when clearly there was enough distance between auto and pedestrian. It was as if suddenly I was transformed into a non-courteous driver. Or perhaps, I always was and now I was being called out for it. Who knows?

It’s been about two years since the switch. The only difference I think I’ve made is exchanging one German brand for another, give or take a few cylinders, a tighter ride and better sound systems. I did some research on both brands and how the public perceives each car. I looked at their current branding, history and driving culture and compared. While “the people’s” car seemed like a car for everyone – an everyday driver, the BMW has kept guard over its ‘ultimate driving machine’ premise for some time. There’s only a $15-25K swing in price between the two vehicles if buying new.

So what changed? The brand perception changed.

BMW has done a remarkable job marketing their product as the best. In addition, the price tag put it slightly further out of reach from the average consumer – or at least the cost of ownership conscience consumer. Car and Driver has put it on their ten best list for 22 consecutive years. One article I read suggested that all BMW drivers are ‘assholes’, hence there is a concentration of a-holes driving BMWs than any other vehicle. Another said BMWs are fast. And fast is linked to testosterone. And testosterone is linked to aggression. I’ve watched other BMWs on the road. Usually, they drive like everyone else. It’s the street racers that weave in and out of traffic causing the perception to suffer.

Both VW and BMW are German imports, but BMW carries the luxury badge. A few interviews with other drivers confirmed what I read on multiple online forums and official reviews. BMW drivers are perceived as elitists. Cocky. They think they own the road. They drive more aggressively than non-ultimate drivers. This may explain why fewer people would let me merge. This is why more people had shorter tempers when I try to maneuver throughout the landscape. This is why I’ve received more middle fingers in two years than I have my entire lifetime as a driver.

From a branding perspective, BMW accomplished their goal of being known as the ultimate driving experience in the ultimate driving machine. It illustrates how we form brand perceptions throughout our lives based on marketing and life experiences. After all, what is a vehicle? It’s point A to point B, right? Or like all other purchase decisions, a way to badge our lives to ourselves and others.
In the end, about the only thing switching from VW to BMW says about me is that my car has more chrome than rust.